The Double Life of Juliette Binoche

The Double Life of Juliette Binoche 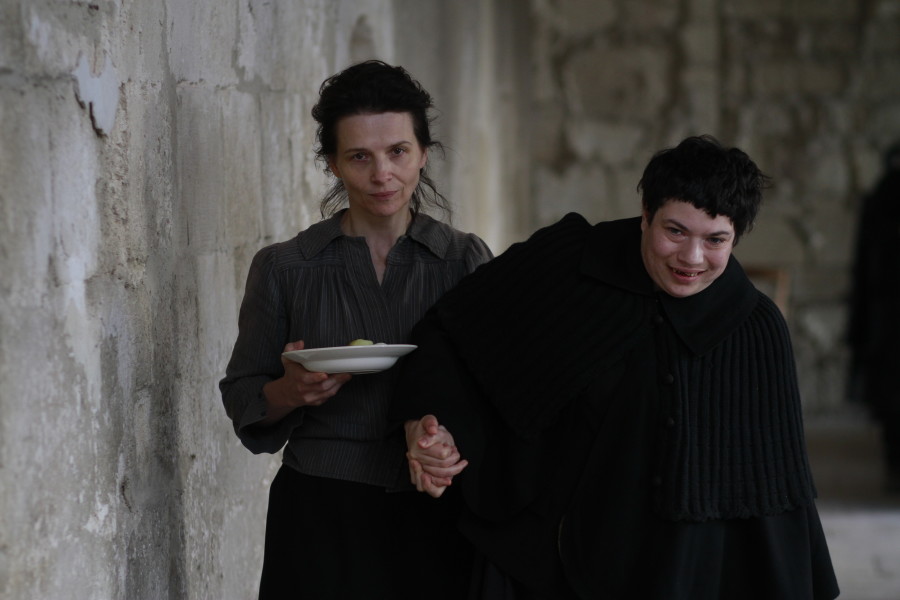 Juliette Binoche stars in Camille Claudel 1915, screening this Friday, May 18 as part of the TIFF Cinematheque series Art Cinema: Painters on Screen.

Thirteen years ago I was studying at the Toronto Film School, and, to be perfectly blunt, it was a terrible experience. I was struggling to find an identity as a filmmaker in an environment that was toxic to my ambitions; despite my best efforts to create a space for the kinds of films I wanted to make, I often felt as if I were trying to sculpt a cement block with a butter knife. It was not an encouraging environment to experiment or explore, as students were expected to aspire to cookie-cutter blockbuster cinema. Anything that deviated from this commercial course was deemed to be a waste of time — I was even told by one teacher that my desire to make experimental films could be compared with masturbation.

Amidst all this, however, were a few teachers who introduced me to new forms of cinema that transformed my practice and reminded me why I wanted to pursue filmmaking in the first place. One of these teachers was Sherry Coman, and it was in her scriptwriting class where I watched my first Kieslowski film, Blue (1993). I was transfixed by the performance of the lead actress Juliette Binoche, who plays a grieving widow whose stone-cold gaze shatters all those who dared meet it; who scrapes her hands against brick walls and struggles to kill a litter of baby rats, yet still moves through the world with a fierce and formidable determination. I was astounded by this internally driven performance that also managed to emit light and subtlety with an elegance that I had never thought possible. 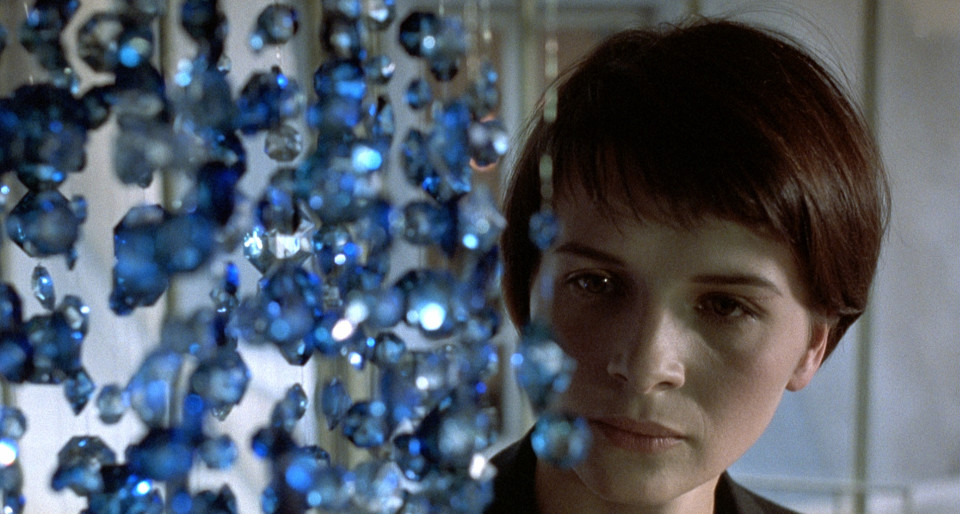 Many actors need time to let their presence develop on screen, but in Binoche’s case, it’s evident that she possessed this quality from the moment she first arrived on a film set. Binoche’s first major screen role was in André Techiné’s Rendez-vous, in which she essentially plays a version of herself: a young woman who has just moved to Paris to become an actress, who lands a role as a maid in a schlocky theatrical comedy and is pursued and abused by men who attempt to possess and control her. 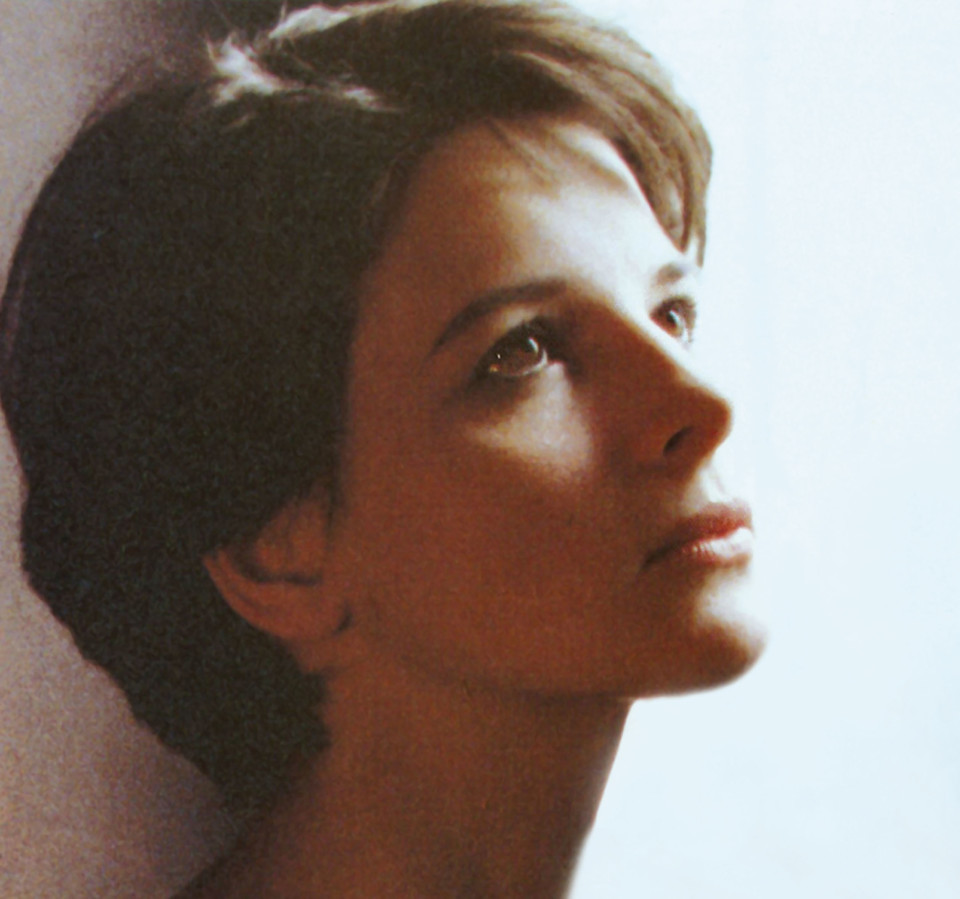 In a particularly poignant scene, Binoche’s character Nina is removing her makeup in her dressing room when she is accosted by Quentin (Lambert Wilson), a frustrated and volatile actor who asks her “How does it feel to take that off and find that there’s nothing underneath?” Without skipping a beat, Binoche spins on her heel and threatens to throw him out. This gesture is performed with such finesse that it feels as if Binoche is not acting at all, but responding as “herself” to the kind of misogynistic comment that she surely must have encountered frequently in her career as a young actress. In this early period of her career, Binoche’s effortless naturalness on screen fascinatingly blurs the lines between her seemingly real self and the characters she was carefully crafting. 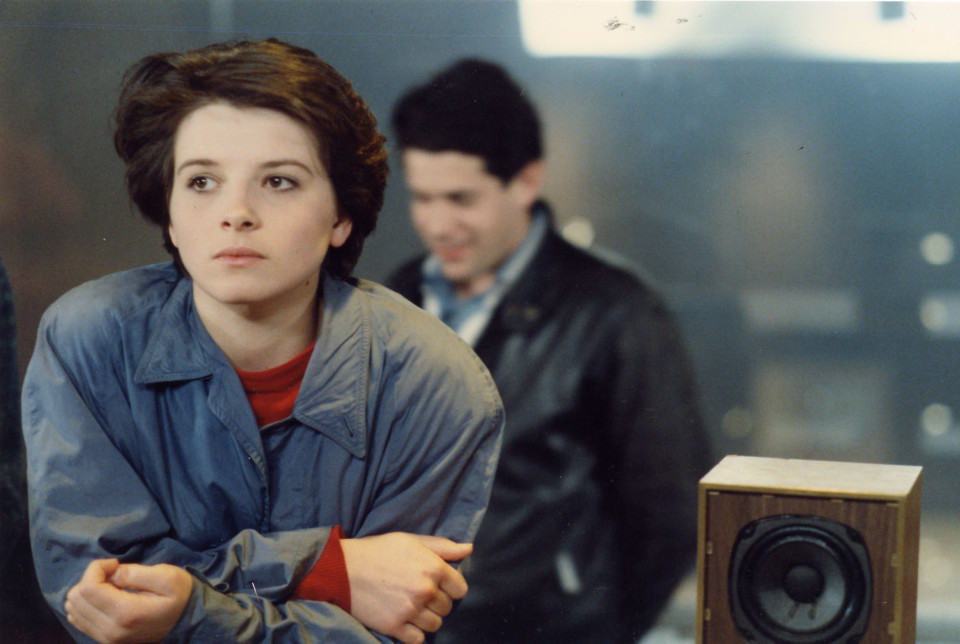 One can see the first half of that equation on display in an interview Binoche did along with Techiné and Wilson when Rendez-vous premiered at Cannes, wherein she was asked if she would like to be in a Hollywood film one day. Binoche replies that yes, of course she would; even though she is cognizant of the difficulties and boundaries, she ultimately states that this is something she wants to make happen. The interview comes to a soft close, but the cameras keeps rolling as Wilson and Techiné take over the conversation and essentially crush Binoche’s suggestion that a European actor could ever have a successful Hollywood career. The camera focuses on Binoche as she crosses her arms and eventually tugs at her hair in frustration. There is a quiet determination in her presence here, and one can clearly read that Binoche is refusing to subscribe to her male colleagues’ ideas of what is and isn’t possible for European actors.

A few years later, Binoche proved her point when she landed her first English-language role opposite Daniel Day-Lewis, in Philip Kaufman’s adaptation of Milan Kundera’s The Unbearable Lightness of Being (1988); she followed this up with an attention-getting performance in Louis Malle’s Damage (1992), and achieved international stardom when she won the Best Supporting Actress Oscar for Anthony Minghella’s The English Patient (1996). Although Binoche had finally achieved her early dreams of Hollywood stardom, she remained committed to the idea of artistically driven cinema, and began to use her newfound star power to become a kind of patron to filmmakers who were determinedly working outside the commercial system. 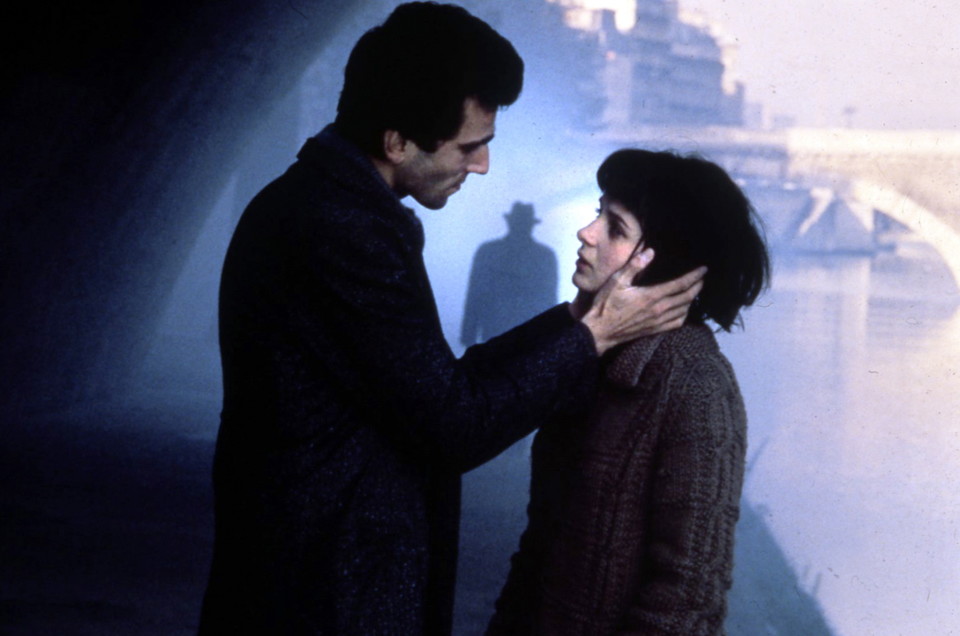 Binoche with Daniel Day-Lewis in The Unbearable Lightness of Being

After her English Patient triumph, Binoche approached Chantal Akerman to write a role for her in the lauded avant-garde filmmaker’s attempt at a crossover romantic comedy, A Couch in New York (1996). Sadly, this collaboration did not go well, due to poor reviews and Binoche’s apparent lack of support for Akerman’s oeuvre (which Akerman speaks to towards the end of this interview). However, Binoche persisted in her dedication to cutting-edge filmmakers looking to reach a broader audience: she starred in Michael Haneke’s first French-language film Code Unknown (2000); American maverick Abel Ferrara’s typically unconventional reflection on the Christ story, Mary (2005); Hou Hsiao-hsien’s first French production, Flight of the Red Balloon (2007); Iranian auteur Abbas Kiarostami’s English-language Certified Copy (2010); and French provocateur Bruno Dumont’s Camille Claudel 1915 (2013) and Slack Bay (2016). 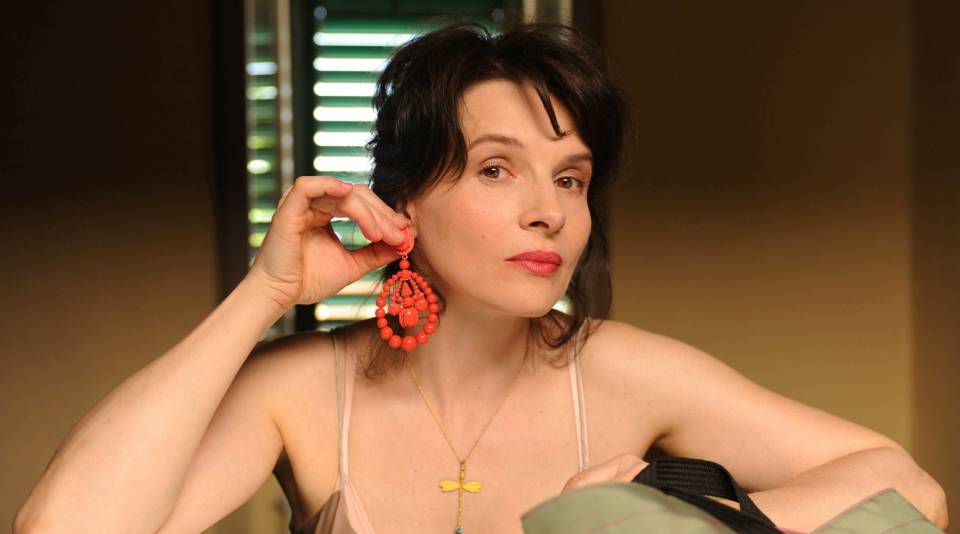 In an industry that is slathered with sexism, I am an ardent admirer of Binoche’s ability to counter criticism. After the release of Certified Copy, Gérard Dépardieu publicly insulted her in an interview, saying “I would really like to know why she has been so esteemed for so many years. She has nothing. Absolutely nothing!” I think that Dépardieu said this because he felt threatened by the way a female actor was able to succeed in international cinema in the same way (if not better) than her male counterparts had done previously. I am sure it was terrifying for him to see a woman move through the world with the same ease and confidence as a man, and therefore he needed to make her feel like her success wasn’t deserved or earned. It’s a theory, but I believe that in his misogynistic quest to minimize Binoche, he conflated her alleged nothingness with her purity as a performer. Unluckily for Dépardieu, his mudslinging came back to haunt him a year later when Binoche ran into him in a Paris market, confronted him, and demanded to know what she had ever done to offend him. In this chance meeting, I imagine her face exuded the same cool tenacity that she had in that interview with Techiné and Wilson. 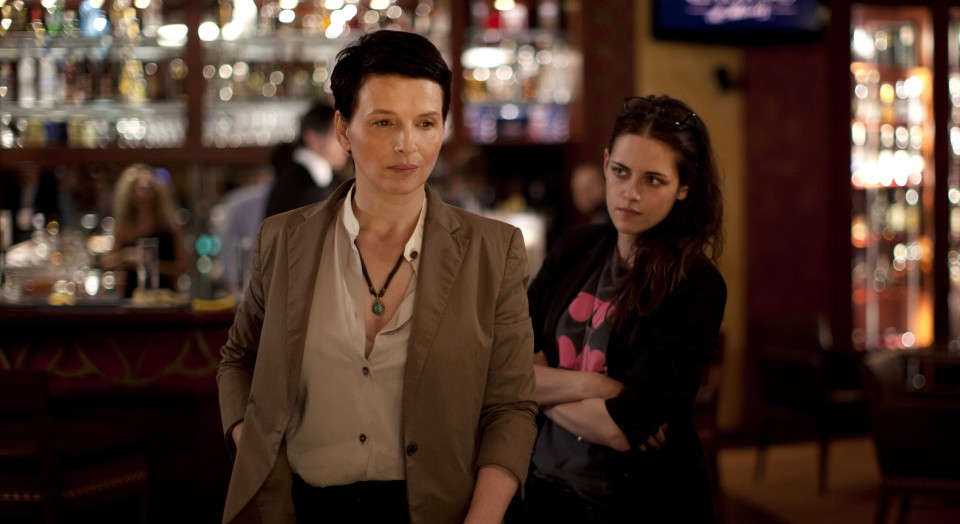 The perennially precarious position of women in the film industry was addressed directly in a movie Binoche made a few years later, Olivier Assayas’ Clouds of Sils Maria (2014), in which she plays a role that could have been an older version of her Nina in Rendez-vous (which is to say, an older version of Binoche herself): a successful, internationally acclaimed actor who subsidizes her commitment to artistic cinema by taking occasional roles in Hollywood productions. (The character Maria Enders’ slumming in comic-book movies mirrors Binoche’s appearances in such fare as Godzilla [2014] and Ghost in the Shell [2016].) Kristen Stewart plays Enders’ young, devoted, but also frustrated personal assistant, who takes a break from running Enders’ life to help her run lines for an upcoming play that she is dreading to appear in: a new production of the play that made her a star, in which she will now take the role of the spurned older woman rather than the smouldering young temptress. 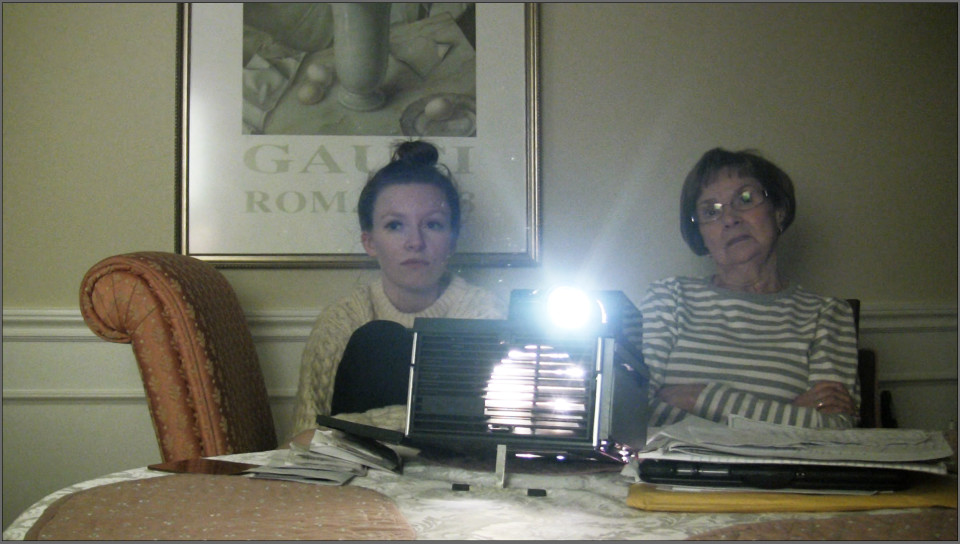 The parallels between the fictional Enders and the real Binoche are both pertinent and poignant, and upon reflection I have realized that the delicate line that Assayas walks between fantasy and reality in Clouds of Sils Maria — as well as his depiction of the intergenerational relationship between Binoche and Stewart — was an unconscious inspiration for me when I came to make my first feature, Never Eat Alone (which screened last season at TIFF Cinematheque). My film is a docu-fiction that follows my grandmother, Joan Benec, as she attempts to find a long-lost love with the help of her granddaughter, played by Deragh Campbell (who is to some extent playing me, after I decided that I could not cast myself in my own film); their quest is interlaced with real footage of my grandmother in a television musical that she starred in at Casa Loma in the 1950s, in which she played the role of a medieval witch. Discovering this footage of my grandmother as a 20-year-old woman, an actress trying to make ends meet in Toronto, was a revelation for me; this insight into how my grandmother looked, sounded, and moved was an incredible gift.

In recently revisiting Sils Maria and seeing Binoche in a role where she is so clearly drawing from the riches of her own experience, I often wondered how my grandmother felt while watching this footage and sharing the anecdotes from her own life that formed the core of Never Eat Alone, and then seeing those real memories transfigured into something both authentic and imaginary within the context of the film. Furthermore, I realized just how much of an impact the onscreen relationship between Binoche and Stewart had on me when I was crafting the characters played by my grandmother and Campbell. Their admiration for one another, but also their need to constantly challenge and nurture that rapport with unabashed honesty, rung true to the relationship I have with my grandmother. It’s these intergenerational bonds with female mentors, family members and role models that keep me grounded and safe when I am feeling challenged as a filmmaker. 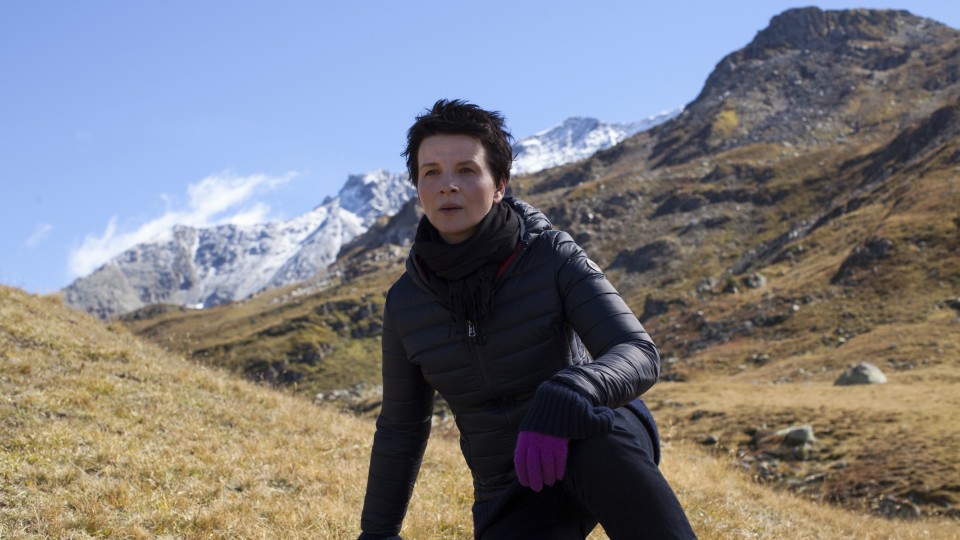 During a rehearsal scene between Stewart and Binoche in Sils Maria, Binoche reads a telling line from the (fictional) play in which she is to star: “I wear a mask — it works with some people, others see right through it.” I believe that Assayas wrote this line for Binoche in order to denote that her choice to walk the line between reality and fantasy is what allows her to create these majestic characters in the first place: to inhabit an utterly sincere humanity onscreen while compelling us to continually question the distance or proximity between the role and her real self. Whether you see the mask or what lies beneath it, Binoche is one of the only actors capable of inhabiting this remarkable duality with such graceful, almost preternatural ease.

The Agony and the Ecstasy

Share Her Journey
You’re invited to send a meaningful message of support and encouragement to the women directors of TIFF 2021 as they get ready to share their films with the world.
Send a message
close