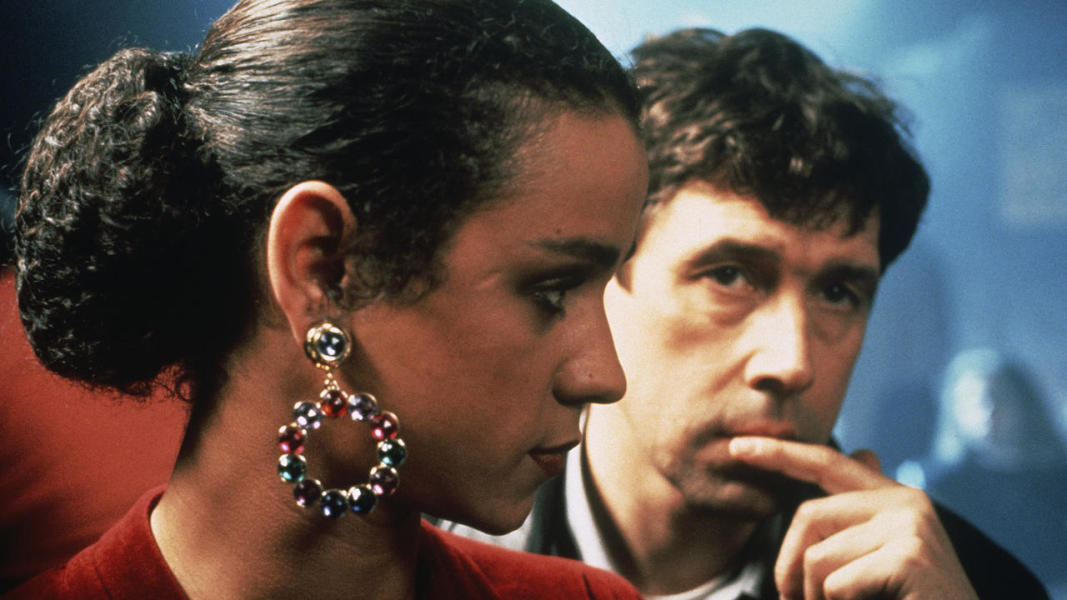 Known for having one of the most surprising twists in ’90s cinema, Neil Jordan’s The Crying Game paved the way for layered, complex love stories between cis and trans characters. Northern Irish actor Stephen Rea was nominated for Best Actor in a Leading Role at the 1993 Academy Awards for his performance as Fergus, a doleful member of the Irish Republican Army, whose insurgent group kidnaps a British soldier (Forest Whitaker). After the two form an unlikely friendship and the soldier is killed, Fergus agrees to look up the dead soldier’s girlfriend, Dil (Jaye Davidson), in London. What ensues is a transgressive and deeply humanistic love story, one which questions the boundaries between nations and gender until a necessary transformation — a change of heart — occurs.

Jordan, who is currently in Toronto shooting his new film The Widow with Isabelle Huppert, will appear in person at TIFF Bell Lightbox on November 8 to discuss the making of The Crying Game and how it has retained its urgency. We recently chatted with Stephen Rea — who, having just put in a cameo in Jordan’s latest film, has now made 11 features with the Irish director — about the ways great screenwriting can make acting easier, attending the Oscars with nominee Clint Eastwood, and how The Crying Game’s once-shocking twist holds up today.

You and Neil Jordan have worked together on over 10 films. Have you developed a particular process as actor and director?

The film I was just shooting in Toronto [The Widow] is our 11th film. My role is only a cameo, but I did it because I wanted to get to 11, you know? Neil and I don't talk [about the script or the character] all that much; I flatter myself I understand what he's doing. But if I agree to do [one of his films], it's bound to be good. Having worked together 11 times now, we understand each other. I don't read one of his scripts and go, "Oh, this is a great character for me." 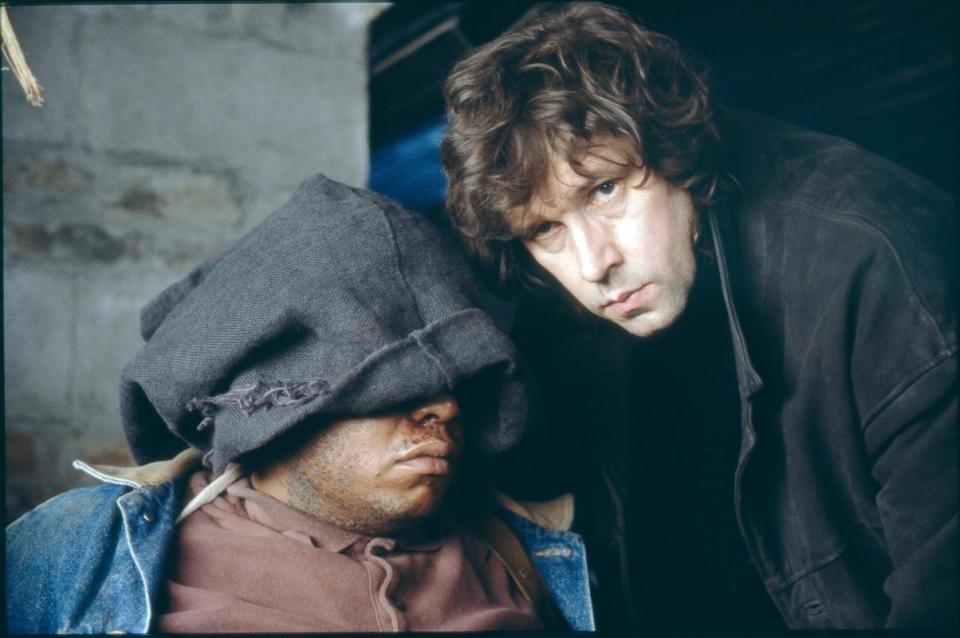 __When was The Crying Game first put on your radar? __

I didn't read the script. Neil and I sat down and he told me the story because he's a wonderful storyteller. Then he came to the part where he said, "And... the [girlfriend] is a man.” I immediately said, "I'll do it!" It seemed like a wonderful dramatic coup.

Neil wrote a wonderful script and worked incredibly hard on the dramatic structure. Quite apart from the sensational aspect of the transgender [twist], it's brilliantly constructed in two halves: the Irish sequence with Forest Whitaker and the London sequence with Jaye Davidson. A few months ago, I saw the new print of the film with Neil and the cast in London [for a 25th anniversary screening] at the British Film Institute. Afterwards, I told Neil, "I haven't seen this movie in 24 years and it's a masterpiece."

__As an actor at that time, did you have any reservations about being in one of the first transgender film love stories? __

Oh no! The only reason to be nervous about being in a film is if it's going to be a bad film. This was obviously going to be a really great film. I come from Belfast and this was such an interesting way of dealing with all the issues that tormented people there. To throw gender identity into the mix of our political identity problems cast a different light on everything.

The IRA man that I play, Fergus, starts to see the world differently. First of all, he starts to see a British soldier as more than just an enemy; he sees him as a human being. I’ve always thought one of the most beautiful moments in the film is when he discovers his girl is a boy. He tells Dil, "Look, I can't do this because you're a boy,” and she says, "Well, okay, before you go, just kiss me." He kisses her and in that moment, he's in love. It's beautiful! He crosses all the boundaries in his head. I thought the film was a wonderful intervention into our politics and all the terrible confusion about how we live with each other in Ireland.

__What were your instincts as an actor about Fergus? What do you think he wants more than anything else? __

What I liked about Fergus was that he was living a life without too much questioning of his position, his views, or his aims. When he meets the British soldier [played by Whitaker], the soldier almost seduces Fergus in order to try to survive. He touches things in Fergus that have been dormant for a long time and Fergus becomes a much more profound and responsible person.

To be honest, my children were born around that time and when you have children, you understand responsibility for the first time. So that's what [Fergus’ journey] meant to me — being responsible for your actions, thinking about other people before you think about yourself. In that regard, it had profound meaning for me.

How did you and Jaye Davidson develop Fergus and Dil’s relationship?

The great thing about Neil's writing is that it doesn't require you to do a terrible amount of awful, emotional acting. The narrative carries you through because he's a fantastic storyteller. When I’m walking down the street in The Crying Game, everybody knows what I’m thinking because they've just seen me discover that the girl I thought I was in love with is a boy. You don't have to act anything.

People have told me, "You and Jaye had a wonderful chemistry,” but the chemistry is in the writing! By the way, I only saw Jaye for the first time in 25 years at the BFI screening. He's a delightful and very serious man. At the time, he was a bit wayward, should we say, but it was perfect for the character. He’s a very good actor but he doesn't want to act anymore; it wasn’t for him, but he was perfectly cast in that role. To answer your question, we liked each other and we didn’t mess each other around. That's all I want from another actor!

How do actors mess each other around?

Trying to do a film that’s not actually the film we’re doing; having ghastly emotional fits when it doesn't require them. I don't want to say things that will get me into trouble, but it’s that worst kind of American acting where everybody's just emoting.

In a recent interview with The Irish Times, you quoted Neil as saying that if “Fergus had been played by one of the Italians — De Niro or Pacino — they would’ve smashed [Dil] up.” That speaks volumes about the state of trans characters at that time. How do you think The Crying Game has aged, in terms of its politics and representation?

When the film came out, of course it was a surprise. It was a shock that suddenly there was penis where there shouldn't have been a penis. The climate is very, very different now. At the time, Neil said, "This is the last taboo." Well, there are other taboos now, aren't there?

Regarding that scene: at the time we laughed about it. Fergus is an Irish boy, so when he saw a penis, he went and vomited in the bathroom. Fergus was a man of violence himself, so it speaks to just how oversensitive Irish people are about sex and gender. There was so much confusion because probably he was already in love, but that is in the writing.

Neil is incredibly sensitive to his own writing. When you're working with him, he'll change things as you’re doing them. He's discovering his own writing all the time and that's exciting because he's constantly discovering the truth. He’s now making a film in Toronto with Isabelle Huppert and she loves working with him too. Actors like a story; I know it sounds so old-fashioned, but you can't beat a good story.

What was it like attending the 1993 Oscars, having been nominated for Best Actor?

Well, if you look back on it, my fellow nominees in that category were Clint Eastwood, Al Pacino, Robert Downey Jr., and Denzel Washington. That's pretty good, isn't it?

__Some of those are the kinds of actors you and Neil were talking about — hyper-masculine actors whose characters might’ve beaten up Dil. __

They would have! I mean, Clint Eastwood told me, "Congratulations on your movie," but I could tell he hated it! He doesn't like that stuff. He's a brilliant filmmaker, but his characters are looking for certainty. In our film, the certainty has gone out the window. Fergus had to find new certainty and at the end, he's actually in prison. He's imprisoned but he's happy because Dil is visiting him and he’s in love. He doesn't care because he now sees how meaningless everything else was. It’s extraordinary! I mean, who writes a love story like that?