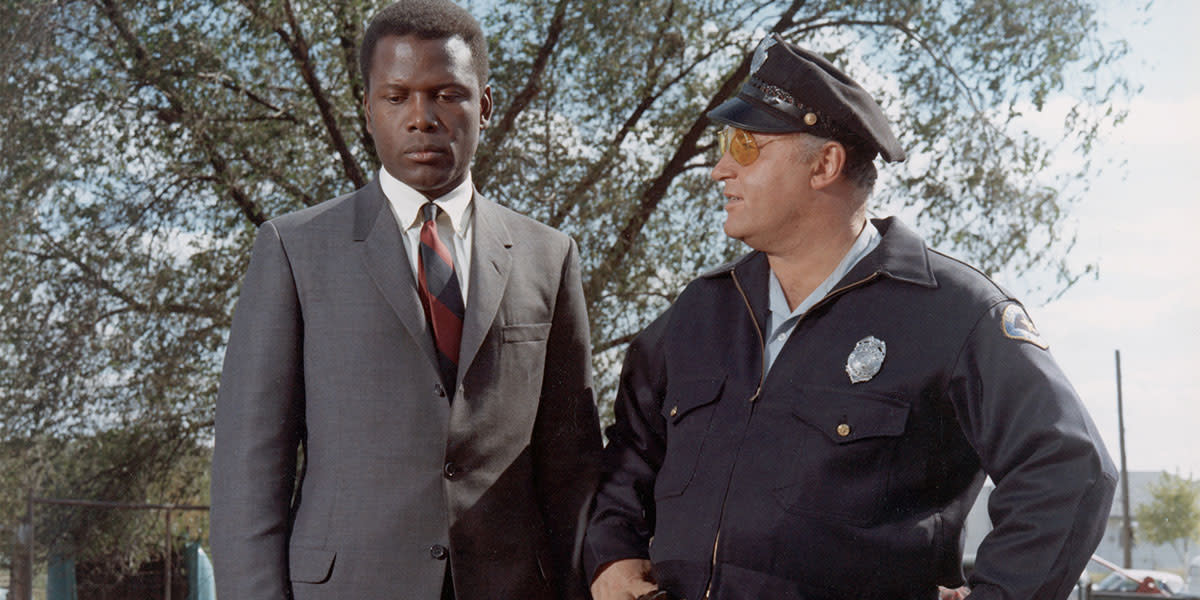 For a film that was actually shot in Illinois, Norman Jewison’s 1967 film In the Heat of the Night makes for a suitably tempestuous portrait of racial tensions in the Deep South. Sidney Poitier (who also starred in that year’s Guess Who’s Coming to Dinner and To Sir, with Love) gives a searing performance as the elegant, defiant, and assured Virgil Tibbs, a detective from Philadelphia who, after visiting his mother, is waiting for a train in small-town Mississippi when he’s arrested at gunpoint on suspicion of murder. This act of racial profiling, which feels especially timely even 50 years later, leads to an unlikely alliance between Tibbs and the town’s outwardly racist and belligerent sheriff, Bill Gillespie (Rod Steiger), as they team up to investigate the slaying of a wealthy industrialist from up north.

For insights into the legacy of In the Heat of the Night and how its themes of systemic American racism endure today, we interviewed its legendary director, Norman Jewison, about working with Poitier, how his Canadian vantage point gave him an unlikely perspective on US race relations, and why it is imperative for filmmakers not to shy away from telling political, pertinent stories. In the Heat of the Night plays November 17 as part of TIFF’s ongoing Black Star series, celebrating 100 years of Black excellence on screen.

What comes to mind when you think about the 50th anniversary of In the Heat of the Night?

Oh gosh, I can't believe it's been 50 years. There have been a lot of screenings in the past year in celebration of its anniversary and a lot of people in America are saying, "Gee, things haven't changed that much!" I think it’s very sad that racial relationships haven't improved, but at the same time, it shows the power of cinema. When the film was made 50 years ago, it really had an impact on America because it was the first time a Black man slapped a white man back.

Sidney Poitier was a powerful, powerful actor and a real matinée idol. He was handsome, he was smart, he was sensitive, and the clash between him and Rod Steiger was terrific on the screen. Rod was a real method actor, Sidney was a cerebral actor, and you could see that [tension] in their performances. Steiger was always using something, like chewing gum. He would chew like mad, then, all of a sudden, he'd stop. That's when you knew he'd thought of something.

The first time I met Sidney, he said he liked the script. Stirling Silliphant was the screenwriter; the script was was based on a novel [John Ball’s In the Heat of the Night] that I didn't think was that great, about a Black detective on the police force in Pasadena. I set the film in Mississippi and I made Sidney’s character come from Philadelphia. Sidney asked, "Where are you going to shoot the film?" I said, "Well, we have to shoot it in the South. I've got cotton-picking scenes." There was a long pause and Sidney said: "I'm not going south of the Mason-Dixon line."

That’s when I realized there was a real racial problem in the country. Sidney had gone down to Atlanta with Harry Belafonte to help register voters, and they had been followed by a pickup truck and threatened by a bunch of rednecks. Sidney didn't want to go to go the south to make a movie, so I was scrambling to find a location that would look like Mississippi. I ended up in Sparta, Illinois — a little agricultural town way down in the southern tip of Illinois near the Mississippi river. In the film, I called it “Sparta, Mississippi.”

Did you and Sidney have the same instincts about the character of Virgil Tibbs?

I think he and I both saw Virgil Tibbs in the same way — he was smarter than everybody else and wore a $2,500 suit. When Sidney comes to the town and is told by his police chief in Philadelphia that he should help [solve the murder in Sparta] because he's an expert in homicide... it was evident he was smarter than Rod Steiger’s character.

The film was made during the height of the American Civil Rights movement and won Best Picture at the Academy Awards six days after the assassination of Martin Luther King. How do you think the cultural climate affected the making of the film and its reception?

I was very worried about the reception of the film. It was the same year Sidney was in Guess Who's Coming to Dinner, which was written by a friend of mine [William Rose] who wrote the screenplay to my film The Russians Are Coming, the Russians Are Coming, believe it or not. Those two films coming out in the same year really had an impact on the racial relationships that existed in America at that time. 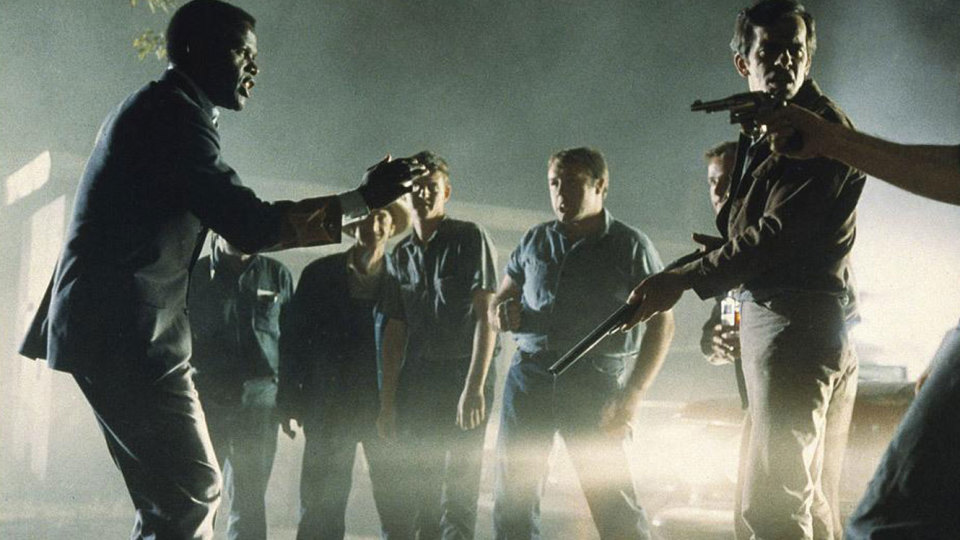 We shot the film in the spring of 1966. Right before the shoot, I met Robert F. Kennedy while skiing at Christmas in Sun Valley. There was a skiing race for kids and my second son, Mike, fell and broke his leg. Kennedy's son was also in the race and he also fell and broke his leg, so we ended up sitting in this tiny little hospital room together waiting for our kids to get their casts. I looked over and smiled at him and he said, "What do you do?" I said, “I'm a filmmaker, Mr. Kennedy." He asked what kind of films I made and I said, "I'm making a film that's going to be very interesting, about a Black detective from Philadelphia..." In two seconds, I told him the story of the film: a Black detective goes to the South to visit his mother and gets picked up in a small town in Mississippi under the suspicion of murder. Then, it's revealed he's a police officer.

Robert Kennedy was the first person to say: "This could be a very important film, Norman. Timing is everything — in politics, in art, and in life itself." I'll never forget when the film won the New York Film Critics Circle Award for Best Film. The person giving out the award: Senator Robert Kennedy. When they called me up, Kennedy looked at me and said, "See, I told you the timing was right." He remembered meeting me and he remembered me telling him the story!

As a Canadian, what was it about In the Heat of the Night that appealed to you?

The idea of a Black detective being caught up in a small town in the South… I had never seen anything like that. I also felt like the film could say something about Black and white relationships in America. As a Canadian, I could be very objective. I think Canadians can sometimes see things more clearly about the United States because we live next door and everything they do affects us.

Did people at the time warn you, "You're making a very radical film"?

Oh yes! I remember there were newspapers in the South who wouldn't even take our ad for the film. I must say United Artists, who put the money up, were very supportive. The year before I had made The Russians Are Coming for them, and it was very controversial at the height of the Cold War. They could see that I was trying to make a statement. It was the height of the Civil Rights revolution, cities were being burnt down. It wasn't easy.

What was your experience like at the Oscars that year, winning five awards including Best Picture, Best Screenplay, and Best Actor in a Leading Role for Rod Steiger?

Sidney was very pleased that Rod Steiger won and was very gracious, even though I thought he should've been nominated and won. I was very pleased we managed to capture Best Picture because it was a tough year. There was Bonnie and Clyde, Guess Who’s Coming to Dinner, The Graduate — big competition! But the Oscars are only important if you win them. (Laughs)

You directed Denzel Washington [another leading man in TIFF’s Black Star series who appears in Malcolm X on November 18] in A Soldier’s Story and The Hurricane. Do you see parallels between Denzel and Sidney?

I do think they parallel each other in their approach to acting. They both started in the theatre and are really intellectual. They approach their characters from a cerebral point of view, rather than a physical one. There's no doubt about it — Denzel admired Sidney. In The Hurricane, Denzel really wanted to capture Rubin Carter as a fighter. Poor Denzel worked so hard and really learned how to fight; he spent hours and hours in the gym. I'm very proud of that performance and of him.

Fifty years later, In the Heat of the Night still resonates. How important is it for filmmakers in the current cultural climate to keep telling political stories, to not be afraid?

The more courage filmmakers have in telling stories which are pertinent to what is happening — in other words, getting close to the truth and not being afraid to make films which are controversial — the better. Don’t even think about it. You shouldn't worry what someone is going to think about your picture, just make the picture! Tell a good story!

The Road to *Moonlight*