With his recent "Refugee Trilogy," the Finnish master of deadpan comedy has become one of cinema’s most important chroniclers of the chief humanitarian crisis of our time 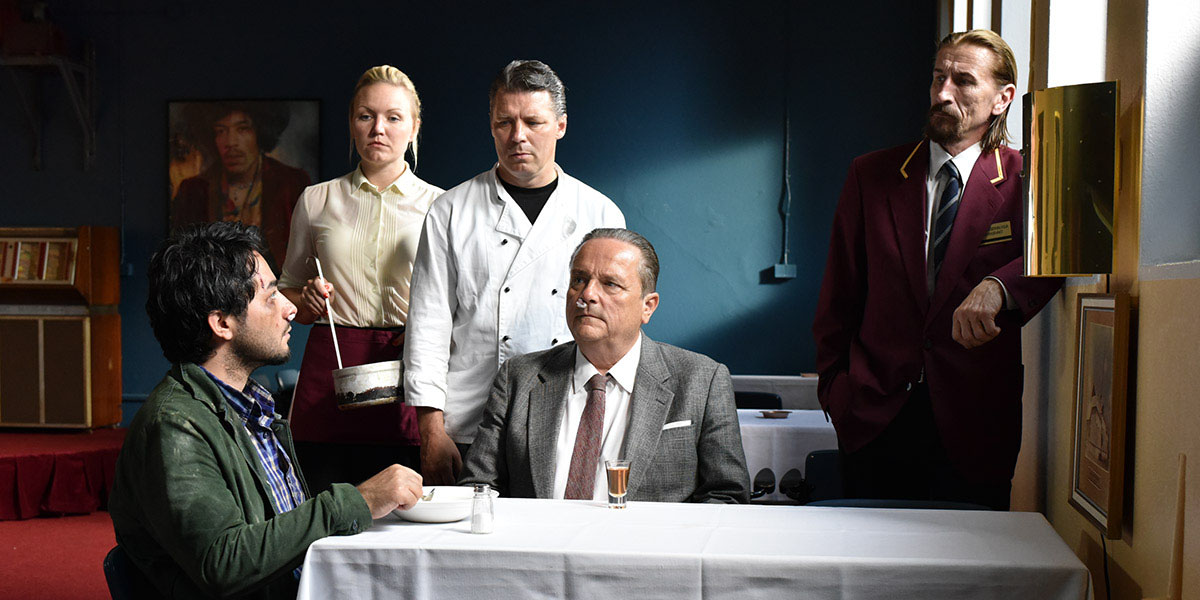 The TIFF Cinematheque retrospective This Side of Paradise: The Films of Aki Kaurismäki begins Thursday, January 31.

In 1992, the New York Times film critic Vincent Canby declared Aki Kaurismäki “an original ... one of cinema’s most distinctive and idiosyncratic new artists, and possibly one of the most serious.... [He] could well turn out to be the seminal European filmmaker of the ’90s.” That opinion has been borne out by the subsequent decades, during which the po-faced Finn rose into the international pantheon — a master malgré lui — and the recent release of the first two films in his “Refugee Trilogy,” Le Havre and The Other Side of Hope, confirmed that his cinema could hardly be more timely, requisite, or exhilarating. Clear-eyed and compassionate, his occasionally cruel irony now assuaged by the wisdom of age and the direness of our times, Kaurismäki’s recent films continue to offer a bracing humanist antidote to, and refusal of, the prevailing belligerence and callousness of current culture.

Prolific, driven, and not a little reckless, Kaurismäki admitted to wild extremes in tone in his work: “I go from making a serious picture to an off-the-wall one and back. I like both kinds of filmmaking. For the latter, I can spend more time in the bar. Perhaps that’s why there are fewer serious films.” (The ratio has tellingly tilted toward the serious as Aki has gotten older.) After working as a postman, bricklayer, and dishwasher, Kaurismäki transformed his consuming interest in film into a vocation, first as a critic, then as a screenwriter for his brother Mika, with whom he co-founded their production company Villealfa (named in homage to Godard’s Alphaville). After co-directing a rock documentary with Mika, Aki went it alone with a contemporary, Helsinki-set adaptation of Dostoevsky’s Crime and Punishment. The absurdist comedy Calamari Union, which is nothing if not “off the wall,” established his penchant for reconfiguring the road movie, and it was followed by two trilogies: the austere “Proletarian Trilogy,” a summit of ’80s cinema, comprising Shadows in Paradise, Ariel, and The Match Factory Girl; and the “Loser Trilogy” of Drifting Clouds, The Man Without a Past, and Lights in the Dusk. (The Finn’s penchant for things-in-threes has been renewed with his current trio of films about refugees.) 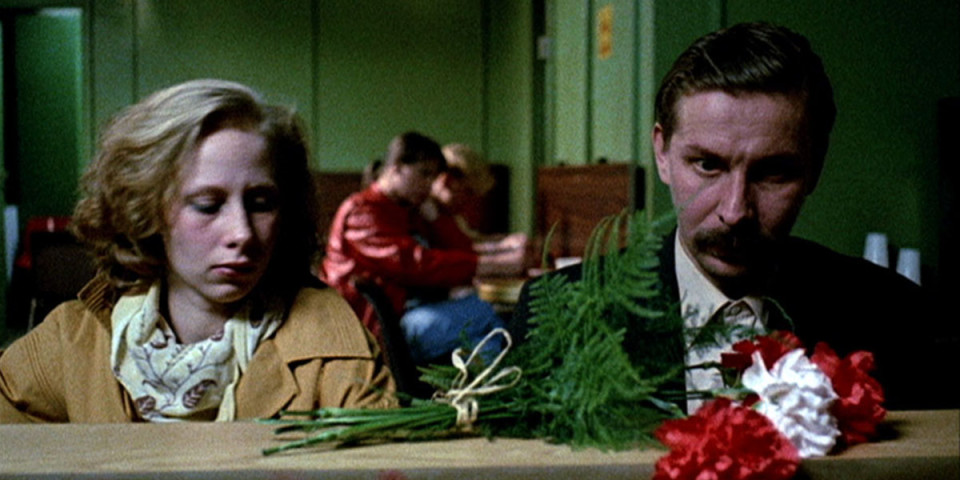 Upending our sense of Scandinavian cinema as morose and miserabilist, Kaurismäki has made Finnish flippancy less a contradiction in terms than an ethnic imperative. Even at his most ascetic, as in The Match Factory Girl, Kaurismäki displays a cruel, deadpan wit which tempers (and intensifies) his essentially mournful view of contemporary life. (Who else would deploy a Soviet ship as a symbol of hope and freedom before the Cold War was over?) Exceedingly funny, especially when confronting rampant alienation and random violence, his films combine hilarity and calamity, parody and politics. His early work established a tone and style characterized by battery-acid irony, mannerist compositions, conceptual jokes, and a jumbling of moods, tones, and genres. His sources and influences constituted a rummage sale of European and American culture, both high and low — Dostoevsky, Shakespeare, Welles, Xenophon, Warner Bros. gangster films, Bresson, film noir, Ozu, Fassbinder, Dante, road movies, Hollywood musicals, Ealing comedies (he once said that Alexander Mackendrick was the only living director to rival Bresson) — and his music tracks mixed it up, too: Shostakovich and rockabilly, cocktail jazz and R&B, tangos and show tunes. 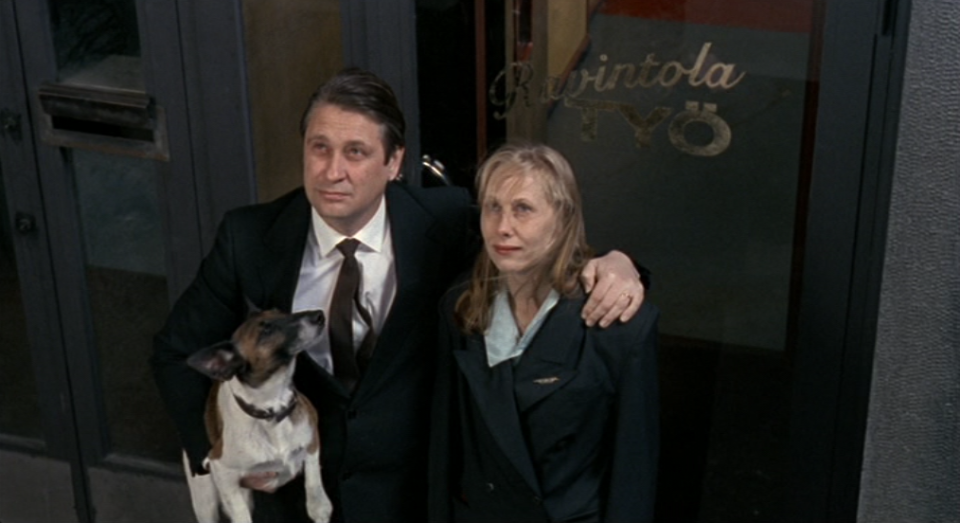 However, Aki never seemed the clever or calculating pasticheur. Apparently a postmodernist, he never submitted to the facile, disdainful irony and arch knowingness of many of his pomo pals. His vision has always been political and humane, even at its most sardonic, and his empathy with his downtrodden, disaffected, working-class characters is insistent and authentic. (Class warfare is somewhat alien to Kaurismäki’s world, if only because the exploited prefer to raise a glass to drown out their doom rather than raise their voices or fists against their oppressors.) 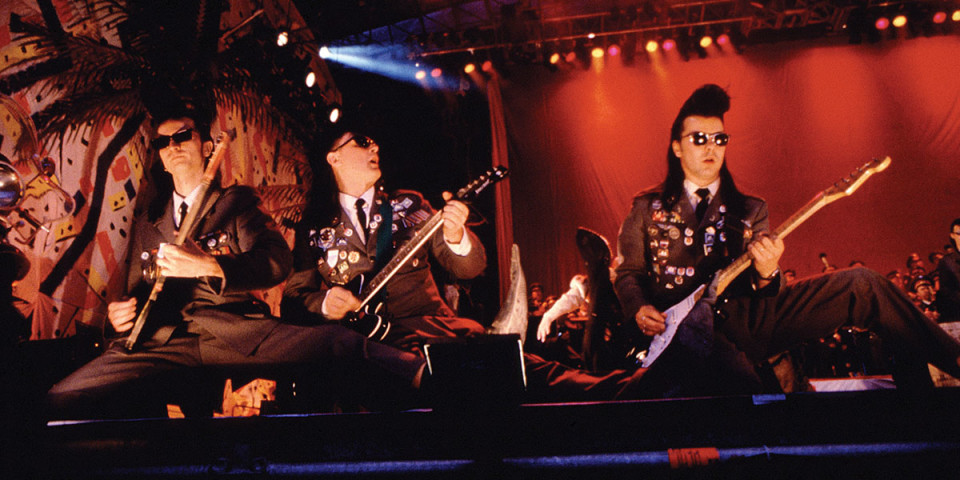 Unembarrassed by pathos, and never one to avoid sentimentality, Kaurismäki can vie with De Sica in his deployment of a dog for melancholic affect, or with Renoir in his use of a nostalgic tune to evoke a sense of camaraderie or solidarity. Similarly, he finds beauty in the everyday: his precise framing and placement of people and objects, and his lambent use of colour and light, lend a formal gravity to every factory, shack, and backstreet bar. Mondrian of the Finnish underclass, Kaurismäki is one of the supreme colourists in contemporary cinema, the Nordic air seeming to have distilled his reds, blues, and yellows into pristine primaries. 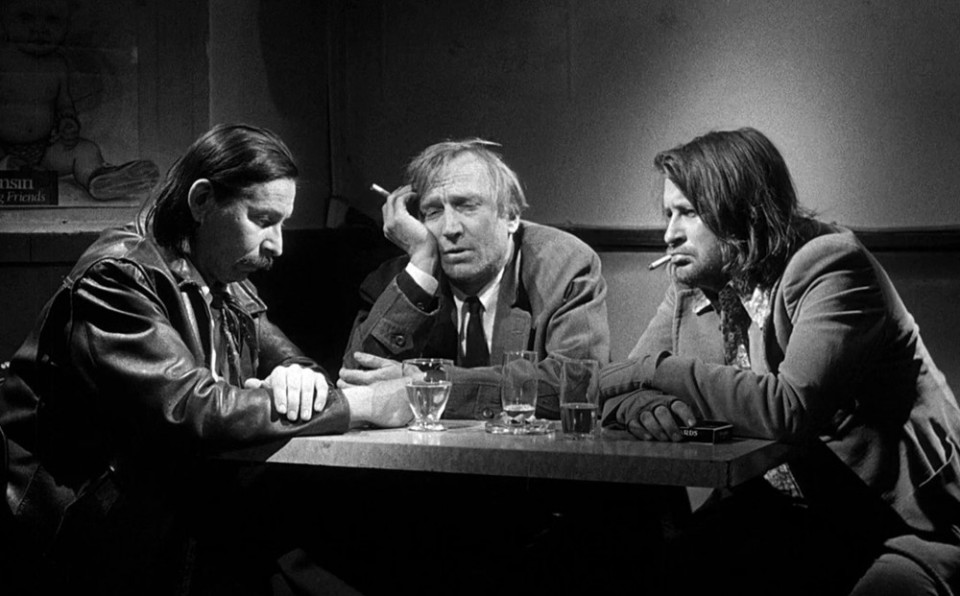 Critics have often bracketed Kaurismäki with Jim Jarmusch, no doubt because of their shared reverence for Ozu and Bresson, their ultra-cool existentialism and deadpan irony, and their taste for deranged Americana (or, in the case of Aki, its Finnish equivalent). He has also been compared to Fassbinder, due to their shared fondness for Hollywood gangster films and ’50s melodramas, the similarity of Kaurismäki’s “Proletarian Trilogy” and Fassbinder’s “Arbeiter Trilogy” (The Merchant of Four Seasons, Ali — Fear Eats the Soul, and Mother Küsters Goes to Heaven), their consistent use of a stock company of technicians and actors (Timo Salminen, Kaurismäki’s great in-house cinematographer, has never received the due he deserves), and, of course, because of their punishing prolificacy. 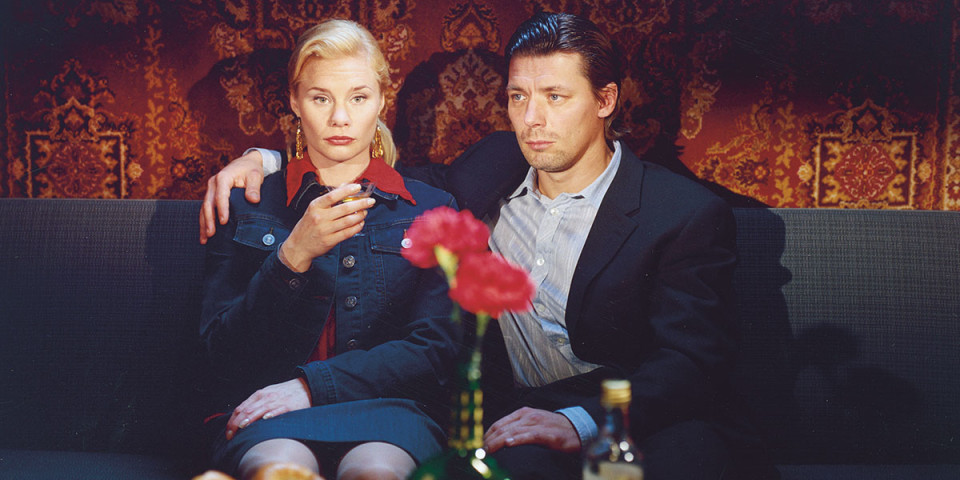 Lights in the Dusk

Kaurismäki has also made no secret of his admiration for Robert Bresson, whom he called “the only living master” in the 1980s. Kaurismäki’s first film, Crime and Punishment, is a fulsome homage to Bresson, and his entire oeuvre is characterized by a Bressonian approach: inexpressive acting style, elliptical narratives, a materialist focus on things as signifiers of interior states, and a determinist view of society (particularly capitalist society). 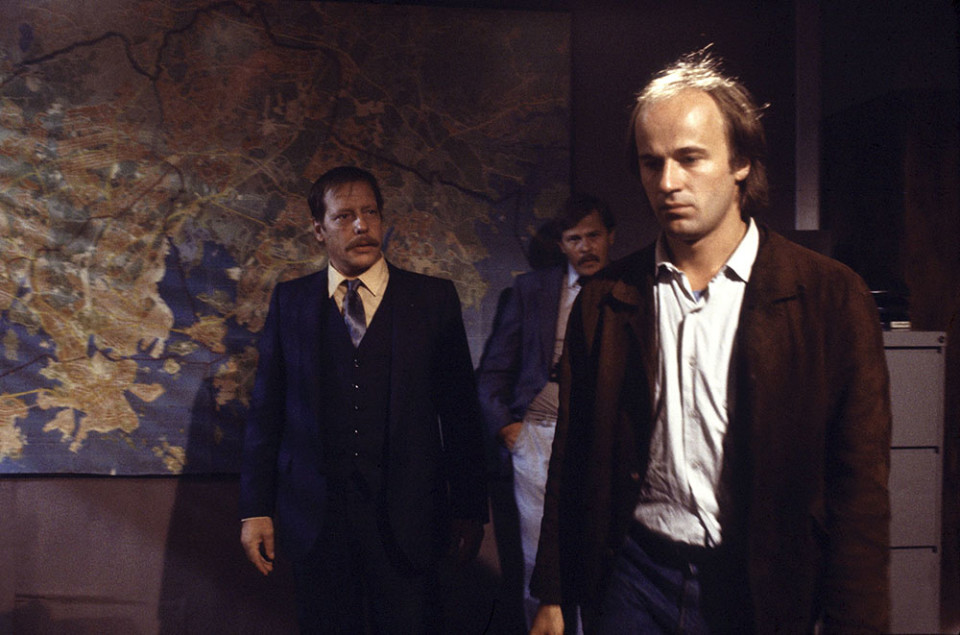 But if Bresson’s last film L’Argent revealed the evil inherent in a world obsessed with money, Kaurismäki’s similar theme in Hamlet Goes Business (and, to a lesser extent, in Drifting Clouds) reveals a major difference in their visions. For Bresson, the question of whether God’s grace exists hangs in the balance. For Aki, as his most recent two films continue to indicate, the stakes are more modest: love, well-being, dignity, memory, survival. 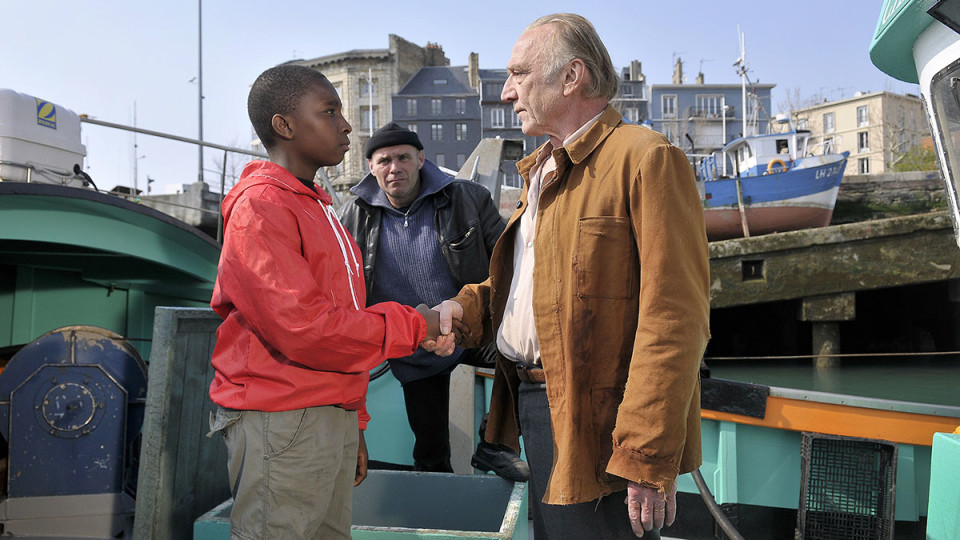 I Hired a Contract Killer

Lights in the Dusk

The Other Side of Hope